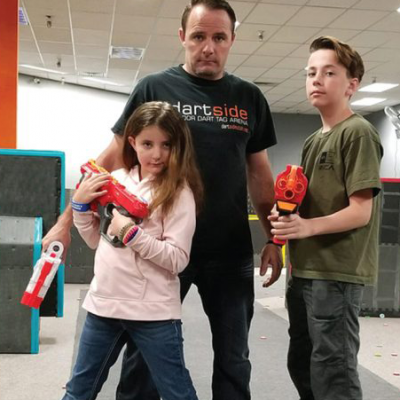 All around the community hardworking people are helping make our community better in many different ways. They are our neighbors, friends, family, and co-workers. As a way to say thank you to these amazing people, we have created the Hometown Hero Award. Each month you the community will nominate someone who has gone above and beyond.

Jeremy was born in Colorado, grew up in Nevada, attended college in Idaho and finally in 2002 set down roots in Utah. Jeremy is the proud father of two children, Kenlee (8) and Kaden (12), pictured above. Jeremy wanted the chance to be the best father he could and to be an active part of his children’s lives and so began the Dartside dream. Jeremy is the co-owner of Dartside with his brother, and “grandma and grandpa” Jeremy’s parents.

Dartside Indoor Dart Tag Arena opened their doors in 2014 in West Layton. Dartside is an interactive experience that uses foam darts and discs. It is a safe, fun way to tag the opposing team and can include anyone from ages 5 and up. Great for the whole family, birthday parties, co-workers, team building, date nights and school activities.

In 2016 Jeremy had the opportunity to move locations to the Layton Hills Mall and since, Dartside has grown to include two full dart tag arenas, DartCity an interactive city for kids 5 and under, DartBall which includes human hamster balls and bowling pins, and a portable inflatable Dart Tag Arena that is used for multiple outdoor activities and events.

Jeremy is an active part of the community and you will find him and his Dartside inflatable dart tag arena at events all year long. He participates in the Davis, Weber & Ogden School District’s field days and 5-Ks, along with the Davis & Weber County fairs, city festivities and parades.

Jeremy is also a huge advocate for children and participates in the Safe Kids Fair, the local police and fire stations safety fairs, trunk or treats and is in alliance and helps with fundraisers for several non-profits like The National Center of Shaken Baby Syndrome and the Kids Hero Foundation. Dartside also partners with several local businesses in Davis County including SeaQuest, Great Room Escape, Virtualities, Tutor Doctor, Texas Road House, Chick-Fil-A and many more.

Jeremy is an active part of the Davis County Chamber since 2015. You will find him at ribbon cuttings, events and open houses across the County. He is a smiling face that is there to help welcome new businesses and help them build and grow in the community.

In 2016, Dartside was awarded Best Small Business by the Davis County Chamber, and also has been in several editorials across Northern Utah including Utah Business Magazine and The Standard Examiner.

Dartside continues to grow and flourish in Davis County bringing in local celebrities such as YouTuber Shonduras, Casey Scott with Channel 2 News, KSL’s Haley Smith and Miss Davis County. Dartside also has a huge following on social media and encourages everyone to take selfies and live videos to post while playing and visiting Dartside.

Jeremy’s vision for Dartside hasn’t stopped yet, as he plans to grow and brand the Dartside name in all of Northern Utah, and eventually open a second location. “I want to grow and become a powerhouse like Cherry Hill and be around for another 50 years … or Lagoon for another 130 years. Become a staple in the community and this state for years to come.”

We believe he is on the right track and will accomplish these goals and dreams. Thank you for everything you do for our community. You truly are a Hometown Hero. Game On Jeremy!