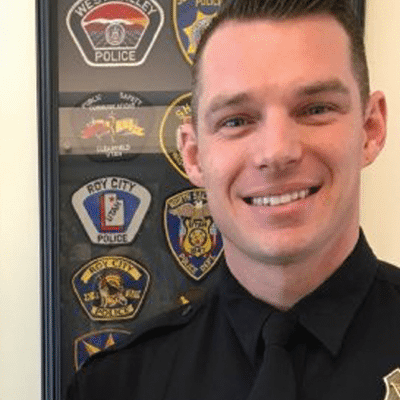 All around the community hardworking people are helping make our community better in many different ways. They are our neighbors, friends, family, and co-workers. As a way to say thank you to these amazing people, we have created the Hometown Hero Award. Each month you the community will nominate someone who has gone above and beyond.

Officer Justin Stanford is the school DARE Officer for the City of Kaysville. He is not however, just the DARE Officer to us, he is so much more! He is a terrific example to the students, and also a friend to everyone! He is extremely organized, caring, supportive, kind and compassionate. He works to build trust with his students, and he demonstrates this by his thoughtful actions. He is always cheerful, happy and smiling, and eager to begin teaching the students.

Officer Stanford works not only as a DARE officer, but he still has to maintain his regular duties as a police officer. Among some of his many job responsibilities as a policeman and DARE Officer, he is also a devoted husband and father. He volunteers as a youth minister for his church, performs in musicals that raise money for charity, is studying theology to become a youth minister, and he is a member of the National Guard. It would seem that he is too busy for any extra-curricular activities, but that doesn’t prevent him from going above and beyond.

The most amazing thing that he does, despite his busy schedule, is that he makes it a priority to support his DARE students by attending their personal events that they participate in outside of school. He has been to a variety of sporting games, various competitions, dance events, plays, and many other activities all on his own free time. He spends his lunch playing with the kids on the playground to gain their trust, and build a rapport with them. His connection with the kids is outstanding, and it has helped to strengthen the DARE program, while building trust in the Police force. This bond makes it easier for the students to approach him when problems arise. As a teacher, I have seen the harmful effects of drug, alcohol and tobacco abuse by some of the parents of my students.

This could have gone very badly for these impressionable youngsters, who watched firsthand the bad example that was set for them by their own parents. I have seen these same students learn how to overcome the trials associated with drugs and alcohol abuse. The DARE program has been very instrumental in teaching coping and prevention skills, but the DARE program doesn’t work unless it has a great teacher. Officer Stanford is this great teacher! His demeanor, kindness, teaching abilities and compassion allow him to function in this capacity as the perfect DARE instructor for the youth. The students get to know Officer Stanford personally, and therefore they all know that he is always there for them, and he is available and willing to listen to them non-judgmentally with an open mind and respect.

Officer Stanford is a credit to the Kaysville Police force, and he is an asset to the DARE program. He deserves to be recognized as a hero for all of his efforts in strengthening and supporting the youth of Kaysville. Next year he is being deployed to the Middle East, and it will be very hard for the DARE program to find someone to fill his shoes. He is our Hometown hero!